An historic building which has been at the heart of life in Durham City for more than six centuries is opening its doors to the public. 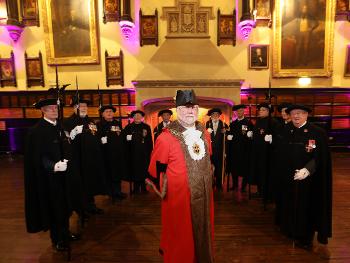 Mayor of Durham, Cllr John Lethbridge, with the Mayor's Bodyguard

Durham Town Hall is now offering people the chance to discover its rich and fascinating history every Saturday with no admission charge.

Audio guides, interactive information points and short films have been introduced to help visitors find out more about the stunning building situated in the city's Market Place.

Cllr Ossie Johnson, our Cabinet member for tourism, culture, leisure and rural issues, said: "The town hall is one of County Durham's oldest and most historic buildings. It's a very beautiful building both inside and out and it also has some thoroughly fascinating stories to tell.

"Visitors will not only get the chance to take a look around but, thanks to new facilities such as interpretation panels and audio guides, they can find out more about the history not just of the town hall but also the city of Durham.

"I'm sure many people pass the building on a daily basis but have never taken a look inside but now they have the opportunity to do just that."

Visitors will learn about the powerful Prince Bishops who ruled the county from the 11th century, the evolution of local government and how the town hall developed from the first timber structure of 1356 to the building it is today.

They will also find out about the role of the Mayor and the Mayor's Bodyguard, who have been based at the site since 1602, and the ancient trade guilds and freemen of the city, who for centuries held political and economic power in Durham and who continue to meet in the building's Guildhall.

New displays also tell the story of colourful local characters such as Joseph Boruwlaski, a 3ft 3in tall 18th Century celebrity known as the Little Count. Born in Poland in 1739, Boruwlaski spent his life performing at the Grandest Royal Courts of Europe, before retiring to Durham where he eventually passed away at the age of 98.

There are also two specially made short films. One tells details the town hall's history as a courtroom and the often grizzly nature of crime and punishment in the 1800s. The other is a short documentary by local amateur film-makers Hill Valley Creative and featuring the music of the local band the Whisky Priests.

The town hall is open every Saturday from 10am to 3pm. For more information call 03000 267 955 or email DurhamTownHall@durham.gov.uk