Multimillion-pound infrastructure works at a site which is primed for a key role in County Durham's economic recovery from the coronavirus pandemic are now complete. 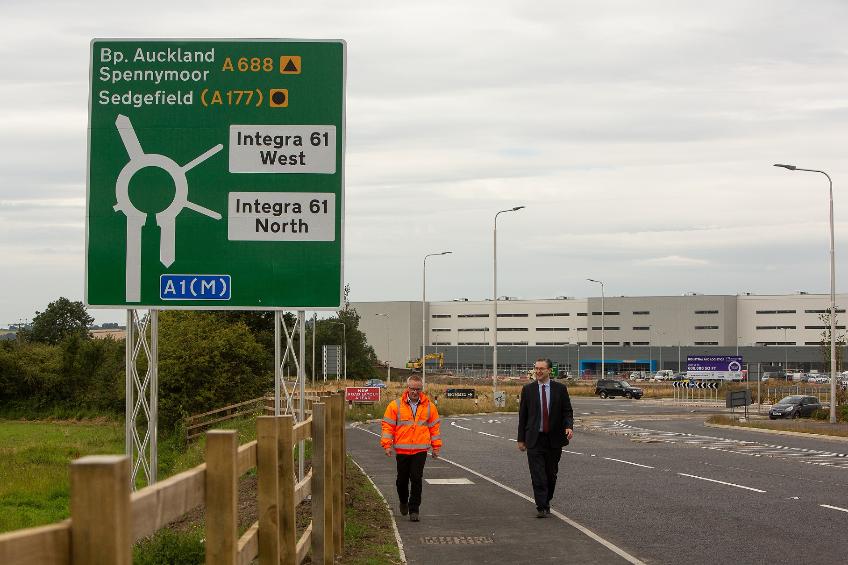 Dave Wafer, head of transport and contract services (interim), and Cllr Simon Henig, Leader of the council, at the junction

The improvements, at junction 61 of the A1(M), at Bowburn, will significantly improve access to the Integra 61 development, which is set to become a premier industrial and logistics location, as well as addressing longstanding congestion and safety issues.

The 205-acre site, owned and being developed by Citrus Group, will provide three million sq ft of high quality industrial and logistics space as well as 270 residential properties, a hotel, nursery and roadside retail units.

The £5.5 million junction improvement scheme has been carried out by the council and jointly funded by us, the North East Local Enterprise Partnership (LEP) and Highways England.

The investment has already helped attract online retailer Amazon, which earlier this month announced plans to open its second north east fulfilment centre at the site, bringing more than one thousand permanent new jobs to the area.

Cllr Simon Henig, Leader of the council, said: "Integra 61 is one of a number of key employment sites around County Durham which have the potential to attract international investors and bring more and better jobs to the north east.

"Located next to the A1(M), the site already offered excellent connections to the wider region and beyond, but these improvements were essential in order to make the site viable for major investors.

"Growing the economy has always been one of the council's key priorities but, as we work towards rebuilding the economy following the coronavirus pandemic, it is now more important than ever. Sites such as Integra 61 are essential to the county's economic future."

The council has worked closely with Citrus Group, the North East LEP and Highways England during the 14-month highways project, which has seen the widening of the junction from two lanes to five and changes to the layout of the A688.

Helen Golightly, Chief Executive of the North East LEP, said: "The investment from the Local Growth Fund in Integra 61 paves the way to create thousands of more and better jobs in County Durham.

"The site can accommodate buildings up to circa one million square feet, helping to attract major employers to the north east. One of the world's biggest companies, Amazon, has already signalled its commitment to Integra 61 and we expect more interest to follow now the initial infrastructure works have been completed.

"Major projects like this will help the north east recover from the coronavirus pandemic by attracting inward investment and creating jobs for local people."

David Cullingford, leading the project for the Citrus Group, said: "After seven years plus in the making, seeing the development now coming to fruition is hugely exciting and the fact that Amazon has recognised the attractions of the site underpins our own confidence in the location and aspiration to create the north east's premier industrial and logistics hub.

"The support we have had throughout from the county council, the North East LEP, the local community and other stakeholders has been fantastic and demonstrates what can be achieved by working together in partnership."

For more information about the Integra 61 site, visit Junction 61  or Integra 61.