A revamped athletics stadium can now offer sport clubs and the community access to even more high quality facilities after receiving a funding boost. 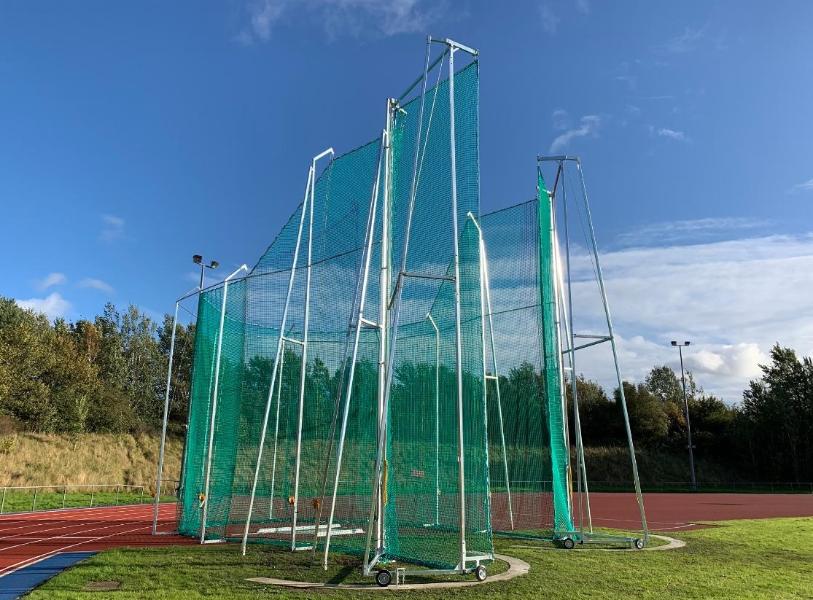 Earlier this year, Shildon Athletics Club underwent a £250,000 refurbishment to secure the venue's future and provide enhanced facilities for the benefit of residents and the clubs that train there.

Funded by Sport England, the council, which owns the stadium, and local councillors, the work included resurfacing the athletics track and enhancing the seating and pavilion.

And thanks to support from Bishop Auckland and Shildon Area Action Partnership (AAP), the stadium also features a new throw cage, which athletes can use when training for events such as hammer and discus.

To find out more about our 14 Area AAPs, visit the Area Action Partnerships page.

A legacy of sport

Just over £12,000 was invested through the neighbourhood budgets of Cllr Shirley Quinn and the late Cllr Henry Nicholson, who died in 2019.

Henry's daughters, Rachael Nicholson and Louise Mather, are thrilled their father will leave a lasting legacy to his hometown through his contribution to grassroot sports.

Louise said: "Dad would be delighted this project has now been completed. He was a keen sportsman in his younger years and understood the positive impact being active has on people's physical and mental wellbeing. Rachael and I are so proud that our dad's contribution to projects like this will benefit the community he loved for years to come."

The stadium is already home to three County Durham-based athletics clubs with more than 300 members in total. It is hoped the improvements, including the new throw cage, will allow the stadium to host North East Youth Development League (NEYDL) athletics events when it is safe to do so, as well as providing opportunities for nearby residents to enjoy outdoor activities.

A welcome boost to the area

Cllr Carl Marshall, our Cabinet member for economic regeneration, said: "The improvements we have made to the stadium are providing County Durham athletes and the local community with access to competition standard facilities, which will help them reach their athletic potential or simply lead more active lives.

"Also, by staging major sporting events in Shildon we can attract more people to the town, boosting footfall and providing a welcome boost to local businesses impacted by the coronavirus pandemic.

"The new throw cage will play an important part in making this ambition a reality and I would like to thank Cllr Quinn and Bishop Auckland and Shildon AAP for their support. I would also like to pay tribute to Cllr Nicholson who also supported this project and did so much to encourage grassroots sport in the Shildon area."

Andrew Walker, Bishop Auckland and Shildon AAP co-ordinator, said: "I'm delighted we could support this project with neighbourhood budget from Cllr Quinn and the much-missed Cllr Nicholson. Henry was a tremendous ambassador for the town and its people, and it is further testament to his legacy that this project has been able to happen."