Information about the temporary closure of footpath 8 (England Coast Path) at Easington Colliery.

Information on the Rights of Way Definitive Map and the legislation involved in making changes to it can be found on this page. 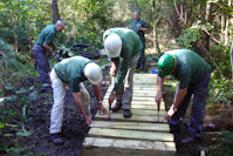 About the definitive map and statement

The Wildlife and Countryside Act 1981 requires that the definitive map and statement is continually updated to incorporate the changes that have come about through legal events.

Changing the definitive map and statement

Public rights of way on the definitive map can be changed, deleted and added, but the correct legal procedures must be followed. Other changes include recording paths on the map where it can be shown that the route has acquired public rights, the dedication of new routes and emergency path closures.

We deal with many applications for footpath diversions for a variety of reasons. The main ones are outlined below:

Various sections of the HA 1980 allow us to consider making diversion orders on behalf of a landowner.

A Section 119 of the Highways Act Diversion application form and associated guidance notes are available below. It is recommended that you read the guidance and seek advice from a rights of way officer before proceeding with an application.

Section 257 of the Town and Country Planning Act 1990 allows rights of way to be diverted to enable development to take place. In other words, if a developer (for instance) has been given planning permission to build a housing estate, then any paths running over this land can be diverted to allow for the erection of the buildings.

We would require a developer to keep any changes to a minimum and to accommodate the path within the development. We work closely with developers and planners to ensure that the character of paths are not altered too dramatically. For example, if land over which a rural cross field path is to be built on, we will encourage developers to provide a wide, open path as close to its original line as possible. We do not encourage paths to be provided between high fences, or running behind property wherever possible.

A Section 257 of the Town and Country Planning Act application form and associated guidance notes are available below. Any application for the extinguishment and/or diversion of footpaths and/or bridleways affected by development should be submitted along with the planning application:

Section 261 of the Town and Country Planning Act 1990 allows for rights of way to be temporarily stopped up or diverted in order to enable minerals to be extracted by surface working.

A Section 261 of the Town and Country Planning Act application form and associated guidance notes are available below. Any application for the temporary stopping up and/or diversion of footpaths and/or bridleways affected by mineral extraction should be submitted along with the planning application:

The term 'stopped up'

Stopped up is the term used when the applicant wants a public right of way to be permanently extinguished. It is not a common occurrence because the legal requirements that must be met are very difficult to justify in most cases.

A Section 118 of the Highways Act Extinguishment application form and associated guidance notes are available below. It is recommended that you read the guidance provided in the link below and seek advice from a rights of way officer before proceeding with an application.

Legislation introduced in 2006 enables us to restrict public access to any public path by placing a gate on it to try to prevent anti-social behaviour and crime. More information can be found in the following guide:

As the highway authority, we can temporarily close roads, footpaths and public rights of way under the Road Traffic Regulation Act 1984.

Under the legislation we need to 'consider alternative routes' and we cannot obstruct pedestrian access to properties. Approved closures are deemed as necessary for works and as such consultations with locals do not have to be undertaken. Objections to closures can be considered but not acted upon if we think the closure is necessary and is being undertaken and managed in the most effective manner.

If there is any doubt that work cannot be completed within five days, it is advisable that an order (valid for up to six months for public rights of way) is the best choice.

The Wildlife and Countryside Act 1981 allows anyone to apply to the county council to make an order to change the definitive map and statement if they believe the map is incorrect. These are called Definitive Map Modification Orders (DMMOs) and can be made if evidence is found to show that:

Evidence may be historical (for example, old maps, tithe plans, enclosure awards) and/or user evidence, where the public have been using the route uninterrupted for more than 20 years. Please contact us if you wish to discuss an issue further and for an information pack about making an application.

Deposits of Statements, Maps and Declarations by landowners

Presumed dedication is where new public rights of way are created following use of the route by members of the public, usually for a period of twenty years or more. A deposit/declaration will not prevent the creation of rights of way that may already exist through an earlier twenty years of use or documentary evidence.

Please see the Gov.uk: landowner statements, highways statements and declarations form on making an application. An application form can be downloaded below and should be returned by post (a signed paper copy is required). This can also be submitted jointly as a landowner village green statement.

A fee of £172 is payable for Highways deposits of less than 200 hectares and an additional £34 an hour for larger land holdings. Where a joint Highways and Village Green deposit is lodged the fee is £230 (due to additional costs required for site advertising). Please enquire directly for the correct fee for your application.

We maintain a register of formal applications for Definitive Map Modification Orders (Section 53B) and landowner deposits made under Section 31(6) of the Highways Act 1980  and Section 15A(1) of the Commons Act. There is a paper version kept at County Hall available to the public for inspection, and you can also see the Public Rights of Way Registers online at Public Rights of Way and Village Green Landowner Deposits.

The information on definitive maps is used by the Ordnance Survey (OS) to show public rights of way on their maps, although they also show non-definitive paths as well. Because definitive maps are continually updated, your OS map may not show recent changes such as a footpath that has been diverted.

If you are thinking of buying a property or land in the county, it is always a good idea to check the online Definitive Map. Questions relating to public rights of way are now compulsory as part of the Local Land Charges search process

Whether you are thinking of buying a property or land in the county, it is always a good idea to check the online Definitive Map. If you want this information for legal purposes you should make an appointment to see the Definitive map for no charge at County Hall in Durham City. Otherwise if you ask us to provide you with the information we will make a charge (currently £85 + VAT).

We are unable to supply information about the ownership of land other than to confirm any county council interests. It is recommended that land ownership queries should be directed to the Land Registry.