A new book which is the first to detail the influence that Roman civilisation had on the development of County Durham is set to go on sale. 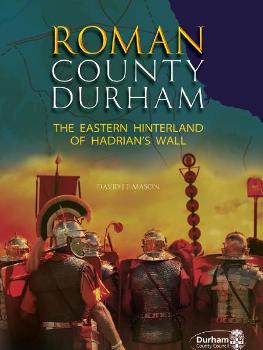 Roman County Durham: The Eastern Hinterland of Hadrian's Wall covers how the Romans' network of roads, forts and farming communities formed a vital part of the infrastructure that supported the linear frontier and its garrisons as well as exerting a major influence upon the history and development of the county itself.

Written by Dr David Mason, our principal archaeologist, the book reveals how discoveries made during the last 20 years have transformed researchers' knowledge and understanding of life beyond the Romans' military communities, revealing a previously unsuspected intensity of settlement along with a range of settlement types including villages, villas, and farmsteads.

County Durham was incorporated into the province between 71-72AD. By 410 AD, many units of the Roman army had departed Britain.

Dr Mason, who joined us in 2004 taking up the post of county archaeologist, specialises in Roman archaeology, particularly the Roman army, its installations and accompanying civil settlements, also the Roman navy, Roman architecture and civil engineering. He also is the manager of Binchester Roman Fort's visitor centre and was the director of the International Excavation project at Binchester between 2009 and 2015 where a vast quantity of artefacts and data from the Roman era were recovered.

Dr Mason said: "In terms of Roman archaeology in County Durham we tend to be overshadowed by Hadrian's Wall and people don't appreciate what a rich Roman heritage we have. This book is the first ever comprehensive account of the Roman period in the county to be published.

"Quite a lot of the main settlements in the county have Roman origins such as Chester-le-Street, Lanchester, parts of Durham City itself and Piercebridge near Bishop Auckland. In total we had seven forts in County Durham as well as hundreds of farmsteads and villas."

Proceeds to be reinvested

The book's 557 pages includes 485 illustrations, 350 of which are in full colour, as well as reconstruction images and plans especially prepared for the publication. Proceeds from sales will be reinvested in archaeological research and publications.

To place and pay for a copy of the book visit the Durham County Record Office online shop.