Man left £700 worse off after his rubbish found in flytip

A County Durham man has been ordered to pay more than £700 for failing to take steps which could have prevented a flytip that contained his rubbish. 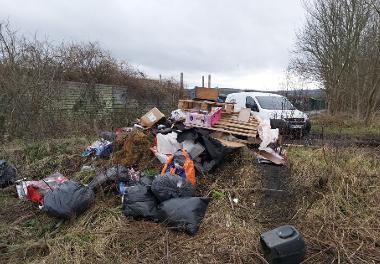 The waste that was dumped in the flytip

In January this year, a report of a large fly tip near allotments at George Pit Lane in Great Lumley, Chester-le-Street, was made to one of our neighbourhood wardens.

Among the waste was evidence of letters and packaging with names and addresses, which the neighbourhood warden used to carry out checks.

One person whose waste was found stated that, in December 2020, they had contacted Justin Burdon, of Henley Avenue in Chester-le-Street, and asked him to remove some rubbish from their property.

Having a valid waste carrier's licence and a van, Burdon agreed and collected the waste that same day.

Burdon, 22, said he had sold his van before the incident occurred, but confirmed there was a small amount of waste in the van when it was sold. This waste became part of the larger flytip in Great Lumley.

He added that he was unaware of the flytip and had no need to dispose of waste illegally due to having his own waste carrier licence.

He also failed to ensure that the waste was transferred to an authorised person with a valid licence.

Burdon appeared at Peterlee Magistrates Court and pleaded guilty to failing to take all reasonable measures to prevent a flytip by another person.

He was given a conditional discharge for 12 months and was ordered to pay £700 costs and a victim surcharge of £22.

Ian Hoult, our neighbourhood protection manager, said: "We share the same aim as our communities in keeping our beautiful county clean and tidy, so that it can be enjoyed by residents and visitors alike. That's why we take incidents of flytipping seriously and will investigate and take action against those involved.

"It is vital that people take all the measures they can to ensure that their waste is disposed of correctly. This includes taking waste to the correct sites, having the appropriate licence permits, and ensuring those who are disposing of waste for you have the authorisation to do so."