Lumiere organisers have declared the festival a resounding success as the 2021 edition came to an end yesterday (Sunday 22 November). 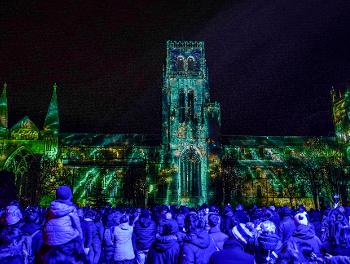 In Our Hearts Blind Hope by Palma Studio

Lumiere organisers have declared the festival a resounding success as the 2021 edition came to an end yesterday (Sunday 22 November).

Produced by creative company Artichoke and commissioned by the council with additional support from Arts Council England, Durham University, this was the most ambitious Lumiere yet.

For the first time since it began in 2009, Lumiere linked city and wider county through six bold commissions that transformed significant landmarks across County Durham from the Apollo Pavilion at Peterlee to Raby Castle at Staindrop. This reflects Durham's bid to be UK City of Culture 2025, which aims to secure the prestigious title for the entire county.

We are leading County Durham's bid to be UK City of Culture 2025, alongside Culture Durham and Durham University. To find out more about the Durham 2025 campaign, visit the Durham 2025 website or follow Durham2025 on Facebook, Durham_2025 on Twitter and Durham2025_ on Instagram.

In the city, audiences explored 31 extraordinary artworks, ranging from 40-member LED French Rock'n'Roll band (The Froggs by Groupe LAPS) in the Market Place, to the interactive 'Tree of Hope' at Prince Bishops Place, to the quietly contemplative 'Anthology: Into the Light', featuring the voices of eleven leading poets as their words were beamed onto Durham Castle.

The festival continued in its international tradition, with artists from 11 countries across the world bringing their extraordinary vision to Lumiere. Inspired by themes ranging from the pandemic to the environment, and from medieval to modern, the artists re-imagined public space and historic monuments using all manner of light.

'Castle of Light' at Raby Castle was the firm favourite of the county programme, with thousands turning out to see this popular attraction spectacularly transformed by artist Javier Riera into ever-changing geometric patterns.

At Finchale Priory, locals who had never before visited despite living close by, flocked to see how Kari Kola had painted the ancient monastery with light.

Others took the once-in-a-lifetime opportunity to view Penshaw Monument appear illuminated like a floating chariot in the sky, in Elaine Buckholz and Ian Winters' majestic memorial to those lost to Covid, accompanied by the haunting music of Hildegard of Bingham.

One visitor declared the event on Twitter to be: "Dazzling, dramatic...next stop #Durham 2025"

Another said: "Especially love the interactive works at Lumiere, they bring out the big kid in everyone"

Alongside international and UK artists, community groups were at the heart of the festival, taking part in five creative projects. A total of 685 people took part including school children, mental health service users, veterans and young carers. Local people's stories and handiwork helped build the imaginary 'City of Light, City of Stories', while others transformed ordinary household plastics into beautiful mosaic flowers for 'Plastica Botanica', a series of flower chains that hang across the South Bailey. Students from Durham Federation school moulded their words in neon for Article 12, an amazing art-science project that references the UN Convention on the Rights of the Child. 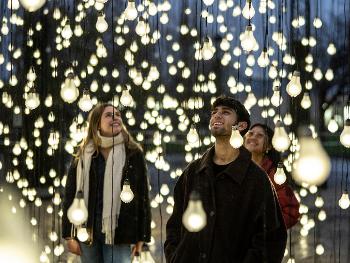 Cllr Amanda Hopgood, our Leader, said: "The atmosphere in County Durham this weekend has been truly magical, and I hope all those who attended Lumiere had a brilliant time. It's been wonderful to see family and friends together again, making memories and enjoying the breath-taking installations both in Durham City and, for the first time, at locations across the county

"I especially enjoyed seeing the installations produced in collaboration with schools and community groups. I can only imagine what it must have been like for those involved in these projects to see their creations lit up as part of a world-class event.

"Lumiere demonstrates the scale of our cultural ambitions and is why we believe County Durham's bid to be UK City of Culture 2025 is so strong.

"I would like to say a big thank you to everyone who has worked so hard to make it happen this year."

Helen Marriage, Artichoke CEO and Lumiere artistic director said:"The numbers alone show the incredible scale and reach of this festival. There is really nothing else like it. From the hundreds of local participants and volunteers to the artists, technicians, riggers, projectionists, security and crew, Lumiere is a massive operation. We have gone through so much uncertainty in the last 18 months, I can't tell you how delighted we are to have been able to produce Lumiere in Durham once again.

"It's been wonderful to see so many people out on the streets, enjoying themselves. The limited capacity we imposed in the centre due to social distancing made for a more relaxed and comfortable experience overall, while those without a ticket explored the artworks along Freeman's Reach, Riverview, at Walkergate and up at the University, on the Ogden Building and St Mary's College. Everyone had a smile on their face and so many people have said to me how proud and excited they are that Lumiere is back".

"Huge thanks once again to Durham County Council who commission this festival and have done so much to support us in its delivery this year, and also to Arts Council England and the DCMS Cultural Recovery Fund, to Durham University and to all our wonderful partners and funders."