14-year-old who is helping others through Covid pandemic recognised

"I hope it has helped inspire others to be kinder to each other and make a nicer world." 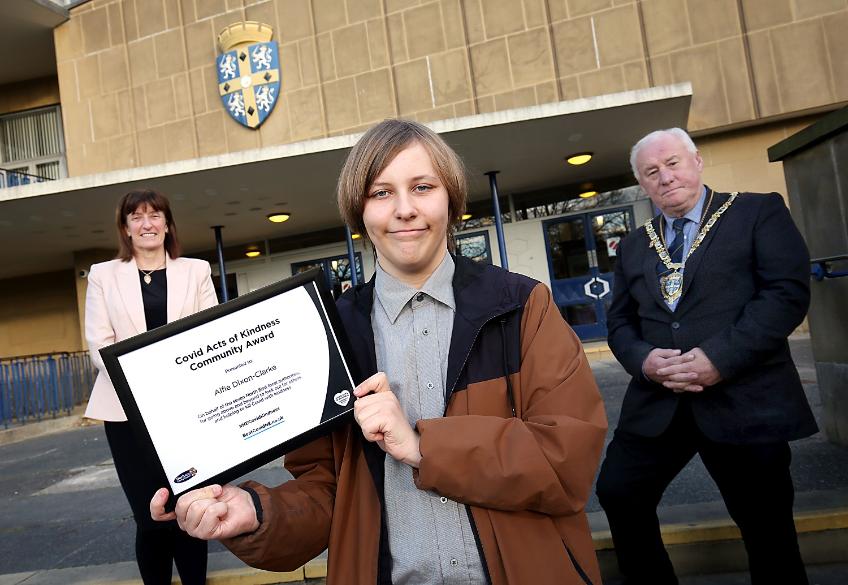 Alfie Dixon-Clark being presented with his award by Cllr Watts Stelling and Amanda Healy, before the introduction of Plan B measures

Those are the thoughts of the North East's youngest winner of a Covid Acts of Kindness Community Award, moments after being presented with the accolade by us.

Fourteen-year-old Alfie Dixon-Clark from Peterlee was put forward for the award in recognition of how, during lockdown, he used money that he'd saved for his birthday to buy supplies to create coronavirus survival packs.

These were stashed full of colouring pages, craft supplies, snacks such as fruit and chocolates and other helpful items which he personally delivered to youngsters across County Durham.

Known locally as 'Alf the Kid', Alfie's actions did not go unnoticed in his community and it was not long before he was receiving donations from friends, family, neighbours and local businesses. Alfie also continued to use his weekly pocket money to keep the project going and, with the help of his supporters, has been able to hand out thousands of packs during the pandemic. This includes special VE Day bags for care home residents.

Alfie, who attends The Academy at Shotton Hall estimates that he has made about 14,000 activity packs for others during the pandemic, while his mum Jaynie believes he has inspired the production of 60,000 for those in need.

The award-winner said: "I didn't expect the reaction I've had but it's an honour to get this award.

"During lockdown, I saw that a lot of people were suffering so that's why I decided to make the activity packs.

"I'm proud because it's not just about me and what I've done. I hope it has helped inspire others to be kinder to each other and make a nicer world, as I believe the power of kindness is humanity's greatest strength.

"I also hope it helps to change the stereotype that kids behave badly, because in my opinion the majority of young people are kind to each other and want to help out where they can."

The awards were organised by regional public health campaign, BeatCovidNE, which is backed by the seven North East local authorities that make up the LA7, including us.

People across the region were invited to nominate those who have raised money, donated time, or rallied communities during the pandemic, to recognise their acts of kindness and to say 'thank you.'

Seven winners were chosen, one from each of the seven North East local authority areas, by a panel which included Amanda Healy, our director of public health.

Alfie was chosen as County Durham winner and was the youngest of the seven award recipients.

Amanda and our chairman Cllr Watts Stelling presented the teenager with his award at the authority's County Hall headquarters in Durham City shortly before the government's Plan B measures came in, and took the opportunity to say thank you in person.

Care and compassion for others

Cllr Stelling said: "The pandemic continues to be an incredibly difficult time for all of us with changes to our normal ways of life as a result of coronavirus which many people find really hard to deal with.

"What is important at times like these is people helping each other at low moments and, through the Covid Acts of Kindness Community Awards, we sought to recognise those who have gone above and beyond in this respect.

"Alfie certainly came into this category by using his own money to ensure other young people had something to do when they were not able to get out and see their friends; as well as bringing smiles to the faces of our older residents by giving them goodie bags too.

"It was an honour and a privilege to meet him and to be able to say thank you in person for his care and compassion for others."