An image of Her Majesty The Queen is being projected onto the headquarters of the North East's largest council to mark the beginning of the monarch's Platinum Jubilee celebrations this year. 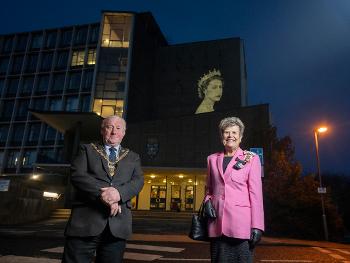 Cllr Watts Stelling, chairman of Durham County Council, and Sue Snowdon, Her Majesty's Lord-Lieutenant of County Durham, in front of the Platinum Jubilee projection at County Hall in Durham City.

The projection, which was launched last night, will be in place at County Hall in Durham City until Sunday 6 February which will be the 70th anniversary of Her Majesty's accession to the throne.

Featuring the official Platinum Jubilee emblem, the projection also includes a 1952 portrait of Her Majesty provided by The National Portrait Gallery. The portrait was taken by Royal photographer Dorothy Wilding as part of a series of images taken for the design of the first postage stamps to feature the new Queen.

The projection kicks off the Platinum Jubilee programme in the county which will see horticultural and street displays by parish councils and shopping centres, a service at Durham Cathedral and a celebration by schools of Her Majesty's role in leading the Commonwealth take place.

There will also be music by military bands, activities for young people including uniformed youth groups such as cadets, scouts and guides and beacons lit by local town and parish councils. Communities will also be encouraged to stage their own celebrations and street parties during the four-day Jubilee Bank Holiday Weekend from Thursday 2 June to Sunday 5 June.

70 years on the throne

Cllr Watts Stelling, our Chairman, said: "This is a fitting way to kick off this year's Platinum Jubilee celebrations in our county. Her Majesty has given decades of sterling service to this country and it is only right that she is recognised in this way.

"I'm sure many of our residents and visitors to the county will be keen to visit County Hall and see the spectacular display over the coming nights as we look forward to further events honouring the Queen's 70 years on the throne."

Sue Snowdon, Her Majesty's Lord-Lieutenant of County Durham, said: "What a lovely way to start the Platinum Jubilee celebrations in the county by projecting onto County Hall a portrait of the Queen and the official Platinum Jubilee emblem.

"No British Monarch has ever celebrated 70 years on the throne and it is fitting that we recognise and celebrate this extraordinary achievement. Her Majesty is much-loved and respected and this is a wonderful tribute and marks the start of the county's celebrations."