Images to celebrate Her Majesty The Queen's Platinum Jubilee are to be beamed onto a historic building in County Durham. 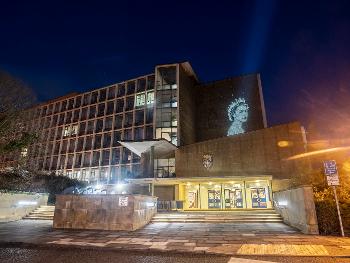 One of the images which will be projected onto Durham Town Hall.

Members of the public are being encouraged to view the patriotic displays at Durham Town Hall, with the site set to be lit up each evening from Thursday 2 June to Sunday 5 June in honour of Her Majesty reaching an unprecedented 70 years on the throne.

The projection features the official Platinum Jubilee emblem as well as a 1952 portrait of Her Majesty provided by The National Portrait Gallery. The portrait was taken by Royal photographer Dorothy Wilding as part of a series of images taken for the design of the first postage stamps to feature the new Queen.

The latest projection provides a second chance for members of the public to see the display after it was previously shown at County Hall in Durham City in February, as the year's events to mark the Platinum Jubilee officially began. It mirrors a projection which will also feature as part of Platinum Party at the Palace which will see Diana Ross, Queen and Adam Lambert, Duran Duran, Sir Rod Stewart and others perform at Buckingham Palace on Saturday 4 June.

Cllr Beaty Bainbridge, our Chairman, said: "This is a fantastic opportunity for people to see this wonderful display in another landmark County Durham location as part of the Platinum Jubilee festivities. It is an extraordinary achievement by Her Majesty to reach 70 years on the throne and only right that the occasion is celebrated in this way and with the other various exciting events taking place here and across the country."

We are supporting local community activities, such as beacon-lighting, picnics and street party events while a celebration service will also take place at Durham Cathedral. Other events taking place in County Durham include A Right Royal Do, which will see schoolchildren from the county perform musical entertainment based on the cultures of different Commonwealth countries, at Gala Durham on Tuesday 14 June.

On Saturday 2 July, Seventy Glorious Years will see the Band and Bugles of The Rifles perform at Wharton Park in Durham City.

And on Thursday 14 July, County Durham will officially welcome the Queen's Baton Relay ahead of this year's Commonwealth Games in Birmingham.