Uniting in memory of Srebrenica

Victims and survivors of the worst atrocity committed on European soil since the Second World War will be commemorated across County Durham next week.

The annual Srebrenica Memorial Week from Monday 4 to Monday 11 July, marks the anniversary of the Bosnian Genocide, which saw thousands of people killed and displaced, and sexual violence used against women on a widespread and systematic scale. 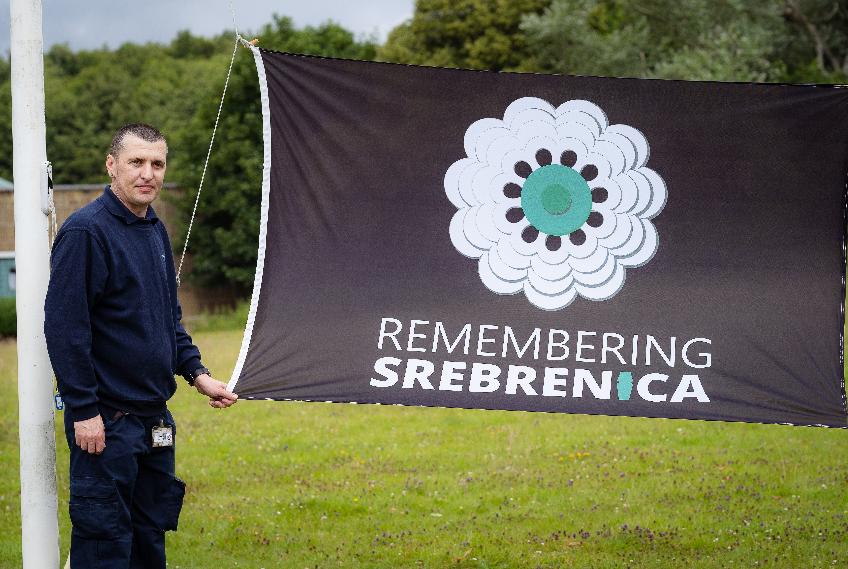 Ourselves and Durham University will mark the anniversary by raising Remembering Srebrenica flags on a number of key buildings. The flag will be flown at County Hall across the week; at Durham Castle, which is home to University College, on Sunday 3 July; and at other university locations.

A display featuring information about what happened in Srebrenica and the wider Bosnian war, including survivor stories, will be on display at our Clayport library, in Durham City, throughout the week. A commemorative event is also being held for university students in the Castle Courtyard.

This year's anniversary, which is particularly poignant following the Russian invasion of Ukraine, centres around two themes of 'Combatting Denial: Challenging Hatred'.

Committed to tackling prejudice and discrimination

Cllr Alan Shield, Cabinet member for equality and inclusion, said: "This year marks 27 years since the genocide at Srebrenica in Bosnia and Herzegovina, in which over 8,000 Bosnian Muslim men and boys were systematically murdered. However, a denial of this atrocity remains prevalent.

"A failure to face up to the past has led to more pain and suffering for survivors of the genocide, who have already experienced the worst of humanity. That is why it is imperative that we never forget the horrors of 1995 and we continue to work together to reaffirm our commitment to tackling prejudice and discrimination."

The Revd Gavin Wort, Durham University's Lead Chaplain, who will officiate at the commemorative event at Durham Castle, said: "Having flown the Remembering Srebrenica flag in 2020 and 2021, we are pleased to be able to hold an in-person commemoration this year. We will remember and honour those killed in the Bosnian Genocide as well those who lost loved ones or suffered in other ways.

"The university is well-placed to address this year's theme, 'Combatting Denial: Challenging Hatred', through its academic research, particularly in the School of Government and International Affairs."

The effect of denial

The denial of the genocide and the crimes committed between 1992 and 1995 are widespread amongst many high-level individuals and institutions. This includes the Mayor of Srebrenica, the current political leadership of Republika Srpska and Serbia and Russia, which vetoed a UN resolution in 2015 to condemn the killings as a genocide.

Denial not only brings more pain and suffering for the survivors but continues divisions and serves as a significant impediment to peace and reconciliation.

Victims of serious crime can often be subject to further trauma when having to confront perpetrators in a court of law who deny that they have committed their crimes or place the blame upon the victim. This exacerbates the suffering of the victims and can deter many from coming forward to report incidents.

Last year, we recorded a presentation from a former Bosnian child refugee who arrived in the region over 25 years ago. Smajo Beso talked about his experiences of the conflict, the impact on his family and his resettlement in the north east.