New measures to tackle anti-social behaviour at a popular Teesdale beauty spot have come into force.

We have introduced a Public Space Protection Order (PSPO) in the area around High Force, Low Force and Gibson's Cave.

The areas form part of the North Pennines Area of Outstanding Natural Beauty and UNESCO Global Geopark and are designated sites of special scientific interest. 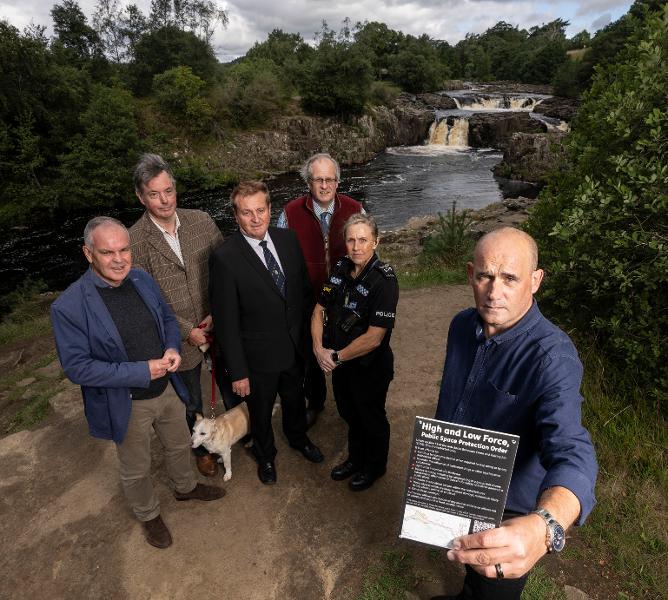 Protecting the area for generations to come

Following extensive consultation, which strongly supported the PSPO, we hope the measure will help protect the landscape after a large influx of visitors throughout the pandemic.

Cllr John Shuttleworth, Cabinet member for highways, rural communities and community safety, said: "While the majority of visitors are well behaved, an increase in anti-social behaviour by a minority of people is impacting on the environment and spoiling the enjoyment of the area for others.

"We hope the new PSPO powers will encourage people to enjoy these beautiful locations safely and responsibly and help us to protect them for generations to come."

Issues have included problems with alcohol and substance use, leaving litter and waste, the irresponsible use of barbecues, graffiti and jumping from cliffs and bridges.

Details of the PSPO

The PSPO is enforceable between 1 April and 30 September each year, for the next three years.

During those dates, it is an offence to:

Where the PSPO is breached, designated council officers and Durham Constabulary staff will be able to issue a Fixed Penalty Notice, with failure to pay leading to prosecution.

Cllr Mark Wilkes, Cabinet member for neighbourhoods and climate change, said: "There is so much to see and do in County Durham and it is important that everyone can use and enjoy our public spaces safely and free from anti-social behaviour.

"It is also important that we all do more to protect our communities and environments. That's why the PSPO is just one measure we'll be taking to encourage responsible behaviour. We will also be continuing to work with our partners to increase security and monitoring, as well as helping to further educate people about the dangers of anti-social behaviour."

Meanwhile, a PSPO has also been renewed in Durham City, banning the consumption of alcohol in specific parts of the city centre.

The measure first came into force in 2019 and, following consultation, has been extended for a further three years until 30 June 2025.