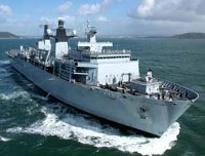 HMS Bulwark is a Royal Navy Commando Assault and Command and Control ship.

Launched in November 2001 she has a ship's company of 390, a quarter of whom are made up from 4 Assault Squadron Royal Marines (4 ASRM).

The ship can carry up to 700 troops and her flight deck can accommodate two Chinook or two merlin-sized helicopters.

A large floodable dock holds four large landing craft - with another four carried on davits (cranes) on the ship's side.

In September 2010, HMS Bulwark was floated out of dry dock after 127 days as part of a £30m refit at Devonport Royal Dockyard in Plymouth.

She led the Navy's key deployment, Cougar 2012, to the Mediterranean and returned to British shores at the end of November 2012. Summer 2012 saw her as one of the 'guardians of the Games', stationed off Weymouth ensuring the Olympic sailing events were safe for all.

The ninth Commanding Officer of HMS Bulwark is Captain Nick Cooke-Priest RN, who has held the position since 2015.

Between April and July 2015 Bulwark was allocated to Operation Weald, the upgraded search and rescue operation off the Italian coast for migrants crossing from Libya.

She was assisted by three Merlin HM.2 helicopters from 814 Naval Air Squadron. Bulwark rescued over 2,900 migrants from the sea during the operation.

Her affiliation with County Durham, through the county council, is the second of its kind.

The county's previous 'adopted' Royal Navy vessel, the 4,200 tonne frigate HMS Brazen, was sold to the Brazilian navy in 1996 after a very successful 14 year affiliation during which the ship developed close links with schools, hospitals, clubs and community organisations throughout the county and raised thousands of pounds for her adopted charities.

Through the new affiliation, the crew of HMS Bulwark are picking up where their predecessor left off.

HMS Bulwark last visited the North East for a week-long visit in May 2013. During that time, crew members took to the road and visited a variety of organisations, schools and hospitals, to further strengthen ties with Bulwark's affiliates. There was also a friendly rugby match between a Bulwark XV and Durham University.

We are equally determined that the link produces real and meaningful benefits to all sections of the community.