A flag symbolising unwavering support for forces personnel has been raised by the North East's largest local authority ahead of Armed Forces Day. 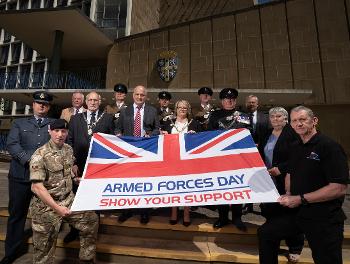 Representatives of the armed forces community joined our Chair, Cllr Beaty Bainbridge, and our Armed Forces Champion, Cllr Paul Sexton, for the raising of the flag outside County Hall.

Cllr Sexton said: "We strive to do all we can to support veterans and members of the armed forces community in County Durham. We will continue to adapt our policies and procedures to ensure we fulfil our commitments to the Armed Forces Covenant so that no-one who serves in HM Forces faces disadvantage compared with any other resident."

Cllr Bainbridge said: "We are proud to mark Armed Forces Day and acknowledge our support for the armed forces community, wherever they serve or have served. We are also grateful to our employees who give their time to serve in the Reserves or Cadet Forces and wish to support all our staff who are members of the armed forces family."

Her Majesty's Lord Lieutenant of County Durham, Sue Snowdon, also expressed her gratitude to those serving and who have served in the Armed Forces.

She said: "Armed Forces Day is one of the most important dates on the British calendar. It allows us an opportunity to commemorate the immeasurable contribution our Armed Forces have made to this country.

"Today our Armed Forces continue to work selflessly with honour and distinction in the most challenging of circumstances imaginable.

"When I meet members of our Armed Forces in the Royal Navy, Army and Royal Air Force, regular and reservist, veterans and cadets and their families who support them throughout so well, my overwhelming emotion is one of pride and gratitude.

"The nation owes a debt of gratitude to the men and women of the Armed Forces and Armed Forces Day is our opportunity to recognise their courage on operation and steadfast devotion to duty and to say thank you."

Local representatives of charity the Soldiers, Sailors, Airmen and Families Association (SSAFA) were also in attendance. Outreach workers working on behalf of the council, who offer a first point of contact to support veterans, those leaving active service and their families, were also present.

In December 2021 we again pledged our support to personnel, veterans, and their families by re-signing the Armed Forces Covenant. The covenant is a commitment to ensure that those who serve or have served, and their families, are treated fairly and not disadvantaged in accessing public services because of their military service.

Since signing the original covenant in 2012, we have implemented a range of proactive measures to fulfil our obligations and follow best practice as a supportive employer and service provider. This led to us being recognised as gold award holders in the Ministry of Defence's Employer Recognition Scheme in 2018.

In April, we extended our leisure centre discounts to include veterans of all ages, in addition to the discounts already available to serving personnel and Reservists.

This week also sees the launch of a new armed forces staff network, which aims to offer our employees who are members of the armed forces community a supportive and welcoming environment, whether they are spouses or partners of serving personnel, a Reservist, a Cadet Force adult volunteer, a veteran, or a close family member of any of these.

Find out more information on support available to members of the armed forces, veterans and their families.